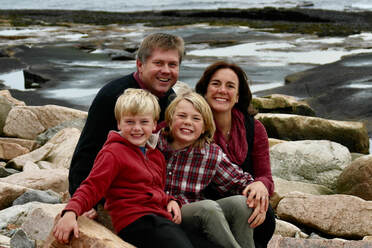 Dr. Seed and her husband, Dr. Ruda, with sons Ian and Brendan
Dr. Seed grew up in New Hampshire where she learned to love the outdoors.  She knew from an early age that she wanted to study medicine and went to college to study the mind-body connection.  She graduated from Lafayette College with a degree in Psychobiology and then traveled to Cote d'Ivoire, West Africa with the PeaceCorps.  She spent two years living in a tiny village teaching the community about various health topics.  Upon returning to the United States, Dr. Seed embarked on her formal medical training at the University of New England College of Osteopathic Medicine.  She elected to train in osteopathic medicine because of the emphasis on holistic medicine and primary care.  After obtaining her doctorate in 2004 she moved to California to complete her residency training at Contra Costa Medical Center.  In 2007 she became board certified in family medicine and moved to a remote town in the northern most part of California where she practiced for five years.  During this time she and her husband had two beautiful children which prompted her to return to her roots in the northeast, fulfilling her dream to live on the coast of Maine.  She joined Ellsworth Family Practice in 2012.  In 2014 she took another step towards fulfilling a lifelong dream by enrolling in the University of Arizona's Integrative Medicine Fellowship.  This two year fellowship has given her the knowledge, tools and resources to bridge the gap between conventional and alternative medicine.   Dr. Seed currently lives in Somesville on Mount Desert Island, Maine